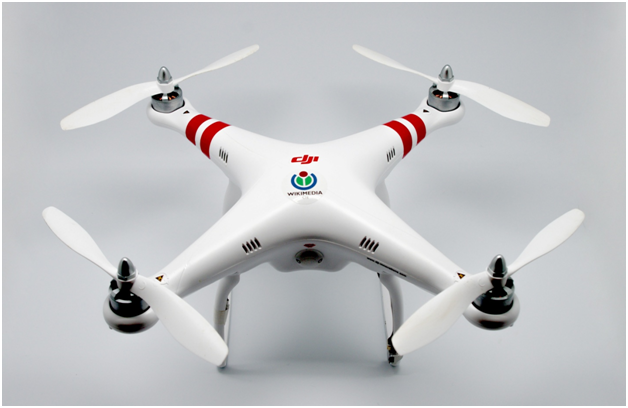 Uses for unmanned aerial vehicles (UAVs), more commonly known as drones, are widening. Originally designed for military purposes, they found new functions in the civilian sphere. Policing, product delivery and photography are just some of the applications in which they have already been utilised; now, it seems that the construction of new buildings might be added to the list.

Taking inspiration from the insect world

At the University of Stuttgart, drones constructed the 2016-17 cantilevering ICD/ITKE Research Pavilion. Inspiration for the pavilion came from the animal kingdom and particularly from leaf miner moths, whose larvae weave strong silk hammocks in which to pupate. Constructed from 184 kilometres of carbon fibre and resin-impregnated glass, the incredible strength of the industrial version of these hammocks belies its lightness. The finished structure weighs only 1,000 kilograms but is 12 metres long and has an approximate surface area of 20 square metres.

The role of the drones

In addition to flying drones, stationary robots assisted with the construction. The role of the drones was to pass carbon fibre threads between the robotic arms on the ends of the stationary robots. Although some drones are controlled by human operators, the entire exercise at Stuttgart was conducted without human intervention.

Using drones safely and within the law

Anyone interested in using drones for whatever purpose in the UK can obtain guidance from the Civil Aviation Authority. This body aims to ensure that drones are flown and used safely, ensuring that they pose no threat to aircraft or people or property on the ground. Special permission is required for anyone using drones for commercial purposes, with more stringent requirements applying to UAVs that have an operating mass in excess of 20 kilograms.

Architects and manufacturers of tensile fabric canopies, such as http://signaturestructures.com/, will be looking with interest at the pavilion, which is the latest in a line of digitally fabricated structures. The aim behind the project is the exploration of the possibilities and potential uses of fibre composite materials in building projects.

Robotic technology, including drones, is an area of rapid advance. The University of Stuttgart’s project signals a potential new use for them. If the idea is taken up by the architectural and building communities, seeing drones constructing buildings could become commonplace.