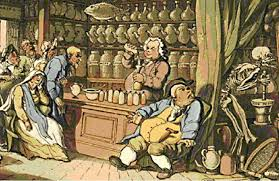 Curing human’s of their ills and aches and pains is now the sole property of the Medical profession. We are now able to buy all kinds of medicines from supermarkets such as Cough mixtures, paracetamol, Aspirin and various antiseptic creams that will pretty much get us back on our feet again. However these cure’s and relievers owe their existence to extensive Paid Clinical Trials and also the work of the first kind of pharmacist and medical expert in the form of the Apothecary. 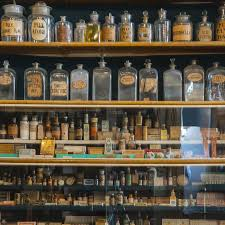 You don’t see many apothecaries any more but in some respects places like Boots and Lloyds should be able to say they are as they are a direct result of the shops that sprung up in the late middle ages. If you needed treatment for something like a bad back or a persistent cough the Apothecary was where you went to go to get a cure. However it has to be said that these were not always one hundred percent effective, if they were even effective at all.

In simple ways and means the Apothecaries merged the known science with that of the folklore until what they had left that they know worked formed the basis for much of our modern medicine today. When it became clear that a mustard poultice was next to useless for curing the plague or some other unpleasant diseases then it went out of favour with the public and the Apothecary stopped selling it. The other issue was cost. The apothecary was not a cheap option and was beyond the expense of many a poor person’s wage. Even if you did buy something there was no guarantee it was going to ever work anyway.