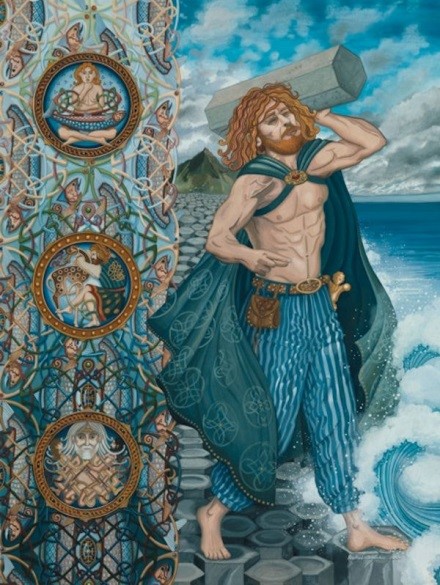 If you ever get the chance to visit Northern Ireland then a trip to the Giants Causeway is a must. Depending on who you’re stood next to when you visit will determine the answer to the question “How did this get here?”  If you have a geologist with you they give you the rather boring, and, unfortunately, true answer, that these are basalt columns formed when lava is pushed up through the earth. It is channelled through tubes and sets rock hard usually, but not exclusively into hexagonal columns. While it’s factual correct it’s hardly the most inspirational tale like say the ones, you can get from motivational speakers at www.adventureman.org/. If you’d turned to the other person, an Irish folk tales teller, you’d have had a very different and much more entertaining answer. It would go, something, like this.

Once Upon a time in Ireland there lived a Giant. His name was Finn MacCool and he was the best warrior the strongest, the fastest, the cleverest and, in his opinion, the most handsome Giant in all the Isles. He could fight off 4 men at a time. He could rip out a tree and chop it up in minutes for fire wood. He could throw a sheep for several yards, he could drink a barrel of ale without getting ill and eat 14 bowls of stew and still have room for some pudding. He was married to the lovely Oonagh who loved him dearly and together they lived happily by the sea.

One day Finn discovered that a Scottish Giant called Benandonner was making a bit of a name for himself. He was saying that he was the best warrior, the strongest, the fastest, maybe not the cleverest Giant in the entire Isles. He thought of himself as not that bad looking either.

Finn was annoyed so he decided to build a bridge to Scotland to have a word with Benandonner. However when Finn went across and saw Benandonner he was much bigger than Finn. He could fight off 10 men, rip out a forest for fire wood, drink 5 barrels of ale and eat 28 bowls of stew (and have 2 puddings!) Finn got scared and ran back to Oonagh.

Benandonner heard about the bridge and decied that he would go and have a word with Finn. He came to Finns house and banged on the door. Clever Oonagh hid Finn in the bath and covered him with sheets and a big bonnet she had made. She opened the door to Benandonner and told him that Finn was away hunting but he could wait if he wanted. Benandonner saw Finn in the bath and said. “Who’s this big Bairn in the bed?”

“Oh, that just mine and Finn’s son” said Oonagh. Benandonner thought, ‘If this is Finn’s son how big is Finn?!” and he ran from the house and pulled up the Causeway behind him.